£0.5m overall increase in revenue to be collected

Single Person Discount ‘failure to notify of a change’ and fraud costs councils around £92m a year according to The National Fraud Authority, who based their research on earlier work by the Audit Commission. Councils know they could potentially increase revenues by regularly reviewing Single Person Discount claims but, due resource constraints, often contract out this work at significant hidden cost.

With over 66,000 active Single Person Discounts, Kirklees MBC wanted a cost effective way to update its records, minimise fraud and maximise income. As the 11th largest Authority in England, with over 440,000 residents, this was a substantial project to undertake.

Having worked and built a solid rapport with Govtech since 2010, the council trusted in its automation software, and knew that an online Review could be conducted quickly, efficiently, and at low cost using Govtech’s webCAPTURE service.

The authority contacted all households in receipt of a sole occupier discount over a phased, four-month period and directed them to an online form to either confirm or cancel their eligibility. Responses were automatically processed in the Revenues system, with no manual intervention. Reminders were sent to non-responders.

Of approximately 55,000 residents contacted (excluding pensioners and CTR claimants), nearly 47,000 forms were completed online, of which over 1,200 were voluntarily cancelled, with an estimated value to the council of £300k. After reminders were issued, Govtech’s automated service then cancelled discounts for non-responders, adding a further £200k to the collectable debt.

The exercise was completed over the first 4 months of the financial year, allowing the maximum time to collect the increase in net debit of £0.5m.

Another SPD amount raised from non-responders

SPDR notices issued as part of the Annual Billing process

By automating the review process, Kirklees were able to reduce the amount of staff resource required to complete what used to be a highly labour-intensive process. The initial campaign was so successful that in the 2018 Annual Bills, Kirklees asked all Single Person Discount claimants to cancel or confirm their discount online, saving on postage costs. Within weeks, over 16,000 had responded, with the formal review process for others starting shortly afterwards. 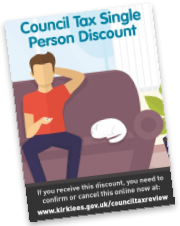 The new digital by design process made it easier for customers to notify us of changes at a time convenient to them and had the added benefit of saving the Revenues team the time and cost of processing SPDs. It also boosted the council’s finances by creating a surplus on the collection fund.

No matter what your starting point is, get in touch and our team will arrange an informal conversation to understand what improvements you want to make and why, explore ways digital process automation may be able to assist and, if you need it, provide help to write a business case based on achieving those goals.